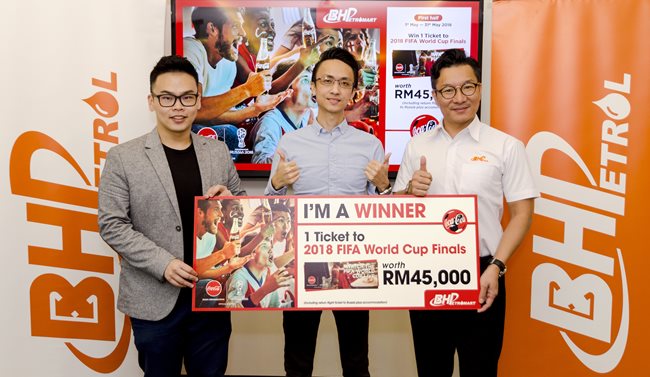 For the First half promotion period started from 1st May to 31st May, Mr Brian Lim Choon Wah, 26 years old from Seksyen 17, Petaling Jaya won 1 ticket to 2018 FIFA World Cup Finals worth RM45,000 including return flight ticket to Russia plus accommodation. His prize which is fully sponsored by Coca Cola entitles him to watch the final football match at the Luzhniki Stadium in Moscow, Russia on 15th July 2018. Brian who frequents BHPetrol Damansara Utama only sent one entry for this promotion and so overjoyed with his winning.

During the promotion period, customers who buy any 3 cans 350 ml of 500 ml bottles of Coca Cola participating brands drinks at participating BHPetrol stations are entitled to enter the contest.  They just need to keep the purchase receipt and send a “BHPetromart” Whatsapp to an authorized handphone number to qualify as contestant.  The actual winner was picked by the organizer based on the fastest and correct answer given.

For the Second half of the promotion period, customers who make their purchases on Coca Cola participating brands from 1st June to 31stJuly 2018 would stand a chance to win 50 Adidas vouchers worth RM150 each.